The New Meaning of Team Work 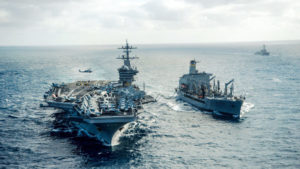 Teamwork means a lot more than a squad of cheerleaders motivating the fans at the local college football game. Try to visualize the most dedicated, full time, the fully trained and fully committed team you can. What do you see in your mind?

I recently finished reading a book titled Top Gun on Wall Street by Jeffery Lay. What a read! Being a pilot for the past 50 years and having 3 other pilots on our staff here at Performance Strategies made this a particularly good read because in this book Lieutenant Commander Lay speaks to the spirit and purpose of the world of Navy Aviators. Having served in the US Air Force myself, I had a keen interest in his account of what it took to fly the huge F-14 Tomcat off and back onto an aircraft carrier. In his world teamwork took on a whole new meaning.

In his well-done captivating book, he describes in detail the teams that are required to make a modern aircraft carrier system function as it was designed to do. This floating city of 5,500 is 1,100 feet long and displaces 100,000 tons. But the real fact that gets my attention is the way the teams work to launch his 33-ton strike fighter off the deck and get it back again. He describes the teams off on deck workers who wear different colored shirts to distinguish their duties in launch and landing operations. In order to make this happen, there exists a small army of flight deck facilitators, and each individual has their own role primarily designated by the color of the shirt they wear.

Yellow shirts are worn by aircraft handlers and aircraft directors that shuttle aircraft around the carrier’s tight and chaotic deck. Green shirts are worn by some of the hardest-working sailors on the deck, including ones who run and maintain the ship’s catapults and arresting gear. Blue shirts are Plane Handlers, who work under the direction of the yellow shirt wearing aircraft handlers and assist in moving aircraft around the deck. Purple shirts, better known as “Grapes,” are all about aviation fuels. They fuel and de-fuel the carrier’s aircraft, often on very tight schedules. The red color is no mistake as the crewmen that wear this color are usually near very hazardous things or situations. Ordnance men deal with building, moving and mounting weapons and arming the air wing’s aircraft. Brown shirts are worn most notably by Plane Captains. Loosely equivalent to a Crew Chief in the Air Force, Plane Captains are responsible for overseeing the maintenance, launch and recovery and general well-being of their aircraft as well as the others in their squadron. White shirts are worn by a wide mix of the deck crew. These include many quality and safety observers such as air wing quality control personnel and individual squadron plane inspectors. Now THAT’S a team!

Here are eleven tips on how you can build a team and motivate them to take you far from Susan Heathfield, who is a Human Resources expert. She is a management and organization development consultant who specializes in human resources issues and in management development to create forward-thinking workplaces. Susan is also a professional facilitator, speaker, trainer, and writer.

In summary, building a team takes time but is worth the effort if you expect great outcomes from your small business. Thanks, Susan for the tips! For more on teams check her website.

Considering the best way to navigate the transition or exit from YOUR business? Start with your trusted business or executive coach. By taking this free 22-question, multiple choice online assessment, you will get a 12-page summary report showing you how prepared you are for such a move. You’ll learn about your preparedness in the areas of financial, planning, revenue and profit, and operations. When you get your report give us a call and we’ll go over it with you at no cost to you. Sometimes it’s a confirmation that you have all your ducks in a row and sometimes it’s a reminder that a few details need your attention. In any case, it’s a great snapshot of your personal business transition or exit readiness. For your FREE assessment and 12-page summary report click here: http://www.exitmap.com/ps-mcg/

Our consulting and business/executive coaching focus supports leadership, sales, customer service, and operations. Included are sales and management assessment surveys as well as leadership, teambuilding, sales operations, business transition or exit strategies and online goal tracking projects. Our training division offers five programs for your team members. Other associates bring additional disciplines as well. If you have editorial content and would like to be featured in one of our business journal editions, drop us an email with your ideas. We may showcase you in future editions of this business journal.